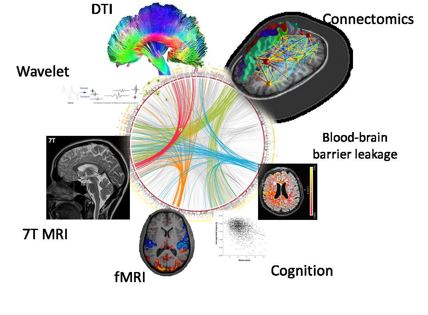 We apply various advanced magnetic resonance imaging (MRI) techniques and data analysis methods to patients with epilepsy, in order to answer fundamental and clinically relevant neurological questions, and thus obtain a better understanding of the underlying mechanisms of epilepsy and its comorbidities. Activities are in collaboration with the Academic Centre for Epilepsy and the Centre for epilepsy Kempenhaeghe.

Using diffusion- and functional-MRI, combined with graph analysis, we showed in paediatric and chronic epilepsy that cognitive dysfunction is associated with altered functional and structural networks.

Ultra-high field MRI (≥7T) holds promise for epilepsy, as it allows for better visualization of brain structure, function, and metabolism (e .g. van Veenendaal et al.Neuroimage Clin. 2018;19:47-55). The National Epilepsy Foundation funded in 2019 a project in which the merits of ultra-high field MRI will be investigated in chronic, drug-resistant focal epilepsy.

Involved staff in this crossroad: